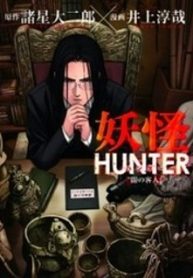 Hieda-sensei is a professor of archeology, with a fervent belief in the existence and power of supernatural creatures like gods and demons. Since he can’t prove anything, his belief has earned him the mocking nickname “Youkai Hunter” from his colleagues. One day, two men from Ootori-chou come to visit him. They’re planning to promote tourism by reviving their town’s old, traditional “Demon Festival,” which has been discontinued for the past century. They’re basing the festival on Hieda’s research, although they’re changing a few details to make it flashier for modern sightseers. Although Hieda is troubled by the history of human death associated with the festival, he agrees to attend as an advisor. When the Demon Festival turns out to be much more ‘historically accurate’ than anyone ever dreamed, it will take all of Hieda’s knowledge and courage to help set things right!