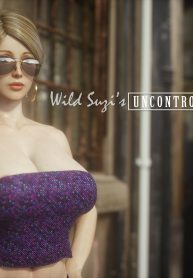 N/A, it has 7 monthly views

In Part 1 of Wild Suzi’s Uncontrollable Lust, Suzi was a repressed housewife who had enough and decided to take a risk by having a fling with a stranger in a public bathroom.

As we enter Part 2, that housewife is disappearing. Something’s changed in Suzi, charged not only by the thrill of having public sex but the fact that many men were watching her fuck just inches away. A part of her she never realized was there is awakening in her. And with it, she wants MORE.

Finally, in Part 3, Suzi’s transformation nears its climax. After many rounds with the men who have entered this broken bathroom stall, she doesn’t recognize who she is anymore…and she loves it. As her own orgasms merge into one continuous wave of pleasure, she pushes harder to find her ultimate satisfaction.

With multiple penetrations and an explosive finish, Suzi is not walking out the same woman she once was in the conclusion to this collaboration series by Jared999D and Andi Guinness!