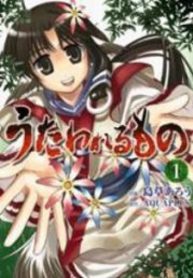 The One Being Sung ; Utawareru Mono

After succumbing to serious injuries, the main character faints in the forest, only to be found and helped later on by a young woman named Eruruu (Whose species has animal-like ears and tails). He has no memories of who he is, and furthermore he has a mask stuck to his face that cannot be removed. The elder of the village he is taken to gives him clothes, and a name: Hakuoro. He is adopted as one of the villages own members, and is also adopted into Eruruu’s family, which consists of herself, her younger sister Aruruu, and the village elder, their grandmother: Tuskuruu. Notes: Based on a [leaf/aquaplus] h-game. -Bakaupdates