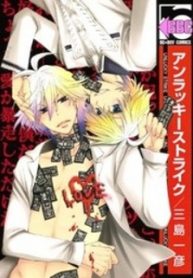 From Girls’ Generation Scanlations:
Kikuchi-sensei rejected a love confession. The boy cursed him, the next day on the train going to his new job, every man in the car wanted him… Butwhy were they harassing him?! If it wasn’t for the young Akane, who knows what, might have happened?
From BangAQUA:
Ever since Kikuchi sensei was cursed to be the destined lover of a man, he has been harassed everyday by men.
The person who saved him one day from the harassment was his student, Akane, who is also madly in love with him.
Although he is interested in Akane, Akane’s affection is probably due to his curse.
Even if he wishes for Akane’s love, it is just his selfish hope.
A sad love story of a brave but prideful teacher.