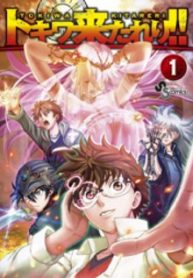 Yasaka Tokiwa lives in an unusual time, and according to his dreams, it’s about to become even stranger. He’s been having a dream of a woman called Ri’in ever since the robot, who he calls Makina, came to his home. He and Makina attend the same school, where their other classmates include a secret ninja (Kusanagi Kanata) and a sorcerer (Yata Haruka). When Tokiwa, the robot, the ninja, and the sorcerer rush to rescue the student council president from a demon, the boys find that they’ve all been having the same dream! What is going to happen to their world?