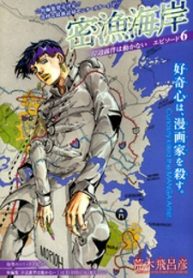 The spinoff will focus on Rohan Kishibe, an eccentric mangaka that appeared in Part 4 of Jojo’s Bizarre Adventure, Diamond is Unbreakable.The story begins with Rohan Kishibe being requested by the cook of the town of Morio, possibly Tonio Trussardi. Rohan is asked by Tonio to retrieve mysterious ingredients lying in the ocean of Morio.