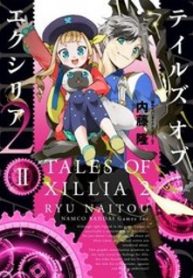 From the popular JRPG, produced by Bandai Namco Games, in which “decisions weave the future,” comes a comic version.
After the incident in “Tales of Xillia,” the shell which separated the two worlds, Liese Maxia and Elenpios, deteriorates and the two worlds join to become one, but not the people of the two worlds. Opposition arises between the people of both worlds, especially the Elenpians, leading to the formation of a terrorist group, whose goal is to interfere with the formation of peace between the two worlds, known as the Exodus.
The story revolves around Ludger Will Kresnik, a young man who lives in a small apartment in Elenpios with his brother, the elite agent of Clanspia Corp., the giant enterprise of Elenpios. Having failed his exam to enter the same company as his brother, Ludger gets another job as a chef in the train station’s cafeteria instead. During his first day of work, he runs into a little girl who wishes to go to the Land of Canaan, the mystic land where all wishes are granted, without knowing that their meeting will unfold the secret of the world and of the strange power inherited within Ludger’s family, which ultimately may lead to the destruction of the world. [Ju-da-su]

The King Of Beetles Mushiking