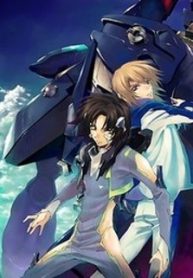 Fafner ; Fafner in the Azure

Tatsumiyajima is the central island in the middle of a small cluster of islands, in a sleepy backwater of the Japanese isles. Not much happens there, and the island’s young people go to school knowing that their lives are likely to remain peaceful and undisturbed. Or so they have been taught… but the truth is different. The fate of mankind is on the line, and Tatsumiyajima is the last line of defense against a hostile and incomprehensible enemy. At the center of it all, fighting for Humanity’s continued existence, is the giant robot Fafner, the dragon that guards this final treasure of mankind. (Source: Crunchyroll)*Note: The original TV anime aired back in 2004. A second season titled “Soukyuu no Fafner EXODUS” is currently airing, the first half aired in January of 2015, with the second half coming in October of 2015.