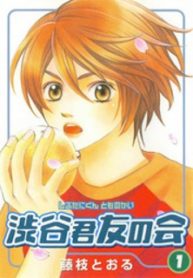 From Entropy:
Ageha is a high school student who has taken over the role of housewife ever since his mother passed away. He has two younger brothers whom he must care for, and a useless father who is always out dating women.
There’s a girl that Ageha likes–his classmate, Nina. She tells Ageha that she’s in love with a handsome, popular singer. Ageha decides to sing on stage at an open mic session to prove to Shinna that he can be like that guy, too. But just after he starts to sing, someone interrupts and abducts him! The stranger is no other than Miyamoto Range, the singer whom Nina loves.
Range wants Ageha to join the Shibutani Alliance Cub—his band—and is relentless in his pursuit. At first, Ageha thinks that Range is annoying. But little by little Ageha is won over by his charm. Will he be able to accept Range? Will Nina ever return his feelings?