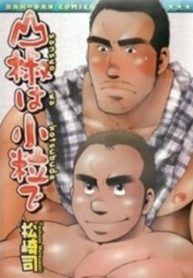 Story of landscape gardener Ono Hiroshi, 29 years old (187cm) and tax office worker Kumedera Katsuya, 27 years old (154cm).
Kumedera met Ono while he was attending the Free Municipal Tax Consultation. As Ono was totally his type, he called out to him, and after discussing tax matters, he invited him to go out for drinks. After a one-night stand or so they thought, they began dating.
We follow their relationship with aggressive seme Kumedera, who insists that Ono is his “WOMAN”, and goes as far as treating him as one, (even though both admitted being gay). On the other hand, we have Ono who can’t seem to be able to refuse anything to his dear lover, especially when it comes to sex!!!