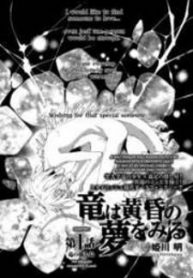 Hirasawa was the scientist in charge of a special lab specimen that was a fusion between dragon and human DNA, dubbed the “Archetype”. But when he escapes the secret organization “Ilumine” which was employing him, taking the specimen and his daughter Koyomi with him as he goes into hiding, Ilumine vows to track him down and retrieve the Archetype.
T.J. is a professional “trapper” for Ilumine, and his job is to track down and destroy the monsters know as “Dicapay” that are wreaking havoc all over the world. The organization orders him to visit Hirasawa’s island hideout and bring the specimen — now a partially-matured Archetype named Kiya whose outward appearance is that of an adolescent boy — back to them.