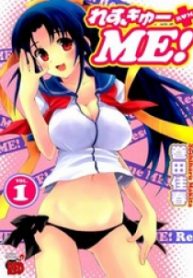 Besides the fact that both of his parents are on an extended business trip overseas, Mizutani Masayuki was just your normal high school student. One day, Shimizu Sayaka, a girl who’s in the same grade as he is, barges unexpectedly into his home and his life announcing, â€œYour parents hired me to be your maid!â€ From that day forward, Masayuki finds himself having to deal with Sayaka, the self-declared â€œlive-in maid, er wife,â€ Takamura Yuka, his aunt who is actually younger than him and fondly calls him â€œOnii-chan,â€ the yandere girl Takagi Mai who is in love with Yuka, and his senpai Ozono Anna whose imagination about Masayuki and Sayakaâ€™s relationship always runs wild. Thus, his days of being caught up in those girls crazy ideas (usually unprintable) begins.
Source: JP Wiki