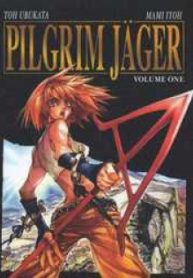 From Wikipedia:
Pilgrim Jäger is a historical fiction that takes place in Europe in the year 1521, at the time of the Protestant Reformation. The story follows two women, Adele the acrobat and Karin the fortuneteller. Afraid of being accused of witchcraft, they disguise their special powers, working as common performers (professionisti) to earn enough money to buy indulgences from the Catholic Church that will hopefully free them from their sins. However, their powers soon get them involved in a great religious battle involving the Medici family, the Este family, Girolamo Savonarola’s “prophecies,” and many others.