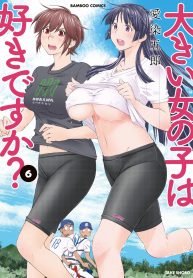 Tachibana Souta is a bit of a multi-talented freeter who gets by from one part-time job to the next, his standout characteristic being that he’s a bit short. One day he’s roped by his older sister into ‘serving’ their college’s volleyball team, of which she’s a member. She also happens to be at least 6 and 1/2 ft. tall, as do the rest of the team’s members who take quite the interest in Souta.