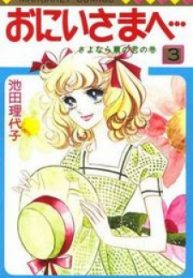 From Lililicious:
A classic manga about girls at a private all-girls school. The storyline centers around the experiences of Nanako, a “normal” girl who is invited to join the prestigious school organization, the Sorority, and is resented by all the other students because she doesn’t appear to be qualified. Other key characters are Nanako’s two friends: Tomoko, her friend since childhood who is alienated by Nanako’s decision to try to join the Sorority, and Mariko, a strange, obsessive girl who is invited to join the Sorority along with Nanako; her “older brother,” Henmi, who she corresponds with by mail; and the “Three Magnificent Ones,” all of whom are admired and quasi-worshipped by the rest of the student body: the head of the Sorority, Miya-sama, the haunted, pill-popping rebel, Saint Juste, and the star athlete with a mysterious disease who doesn’t like the Sorority, Kaoru-no-kimi.

Beauty In The Male-Only School