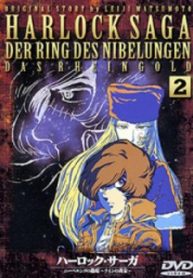 A sci-fi retelling of Wagner’s “Ring of the Nibelungen”, starring Captain Harlock. The series was first serialized from 1990 to 1991 in Chuukosha Fan, a used car magazine (!). A sequel was published for free directly on Shinchousha’s webpage from 1997 to 2000, making it probably the first online manga.