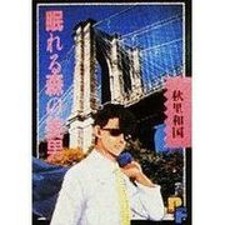 From PRISMS:
1982. Tomoi Hisatsugu went to New York to work as a doctor. But that’s not all. He hopes to lead an easier life as a young homosexual than in Japan. Indeed, he meets another doctor, Richard Stein, and they become lovers. Nemureru Mori no Binan tells of their relationship in an extremely realistic way. It portrays the life of homosexuals in the early 80s very exact and conveys the mood of the secrecy gays and lesbians had to live in well. It is also a very down to earth story with characters that could meet in the street every day and doesn’t use the elements so common in today’s Shounen’ai-Manga.