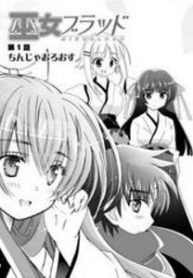 After the death of his parents in an accident, Yutaka was taken in and has been living peacefully at the Mita Shrine. One day, a pair of really hot miko appear, causing many nosebleeds for Yutaka. When he is drawn into their fight with a dangerous evil spirit, he uncovers the fact that he also has some kind of mysterious power inside himself as well. Now it looks like he’s going to become involved with their dangerous fight against evil spirits! [tethysdust] @ mangaupdates