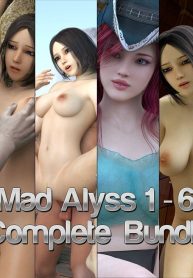 Chapter 1 – A pretty girl who lost her memory, has met some friends in a dreamland. The playful friends accidentally unleashed the inside madness of the girl and tragedy happened. Things got worse when the madness brings to her sexual desire. Here she started the erotic journey while searching for her lost memory!
Chapter 2 – The sequel to Mad Alyss! Featuring more action, fucking and excitement! Alyss wakes up and finds herself captured by Mr. White in a deep cave. He knows everything about Alyss, including why she’s there. But he isn’t going to talk that easily. In order to get the answers, Alyss will have to fulfill Mr. White’s sexual desire. Slowly, she starts to enjoy it more and more, before the “madness” visits again…
Chapter 3 – Alyss continues her adventure to look for the far away Queen. She then meets a pair of mechanics who are also twin brothers. They’re trying out their first flying machine in the world. Needless to say, the twin brothers happily bring Alyss along to travel in the air. And once again she is going through the journey of danger and excitement…
Chapter 4 – Alyss been through a couple of adventures since she has begun a journey in the hope to see the Queen, she just fell down from the sky with her magical clock. She has been rescued by a group of undead pirates with a magnificent Mermaid as their captain, Alyss is then unfortunately about to become the sexual slave of the zombie crew. But wait, what if her madness comes back again? This might turn into a confrontation between Alyss and the captain Mermaid. Art by Amusteven. Story by Camille Juteau.
Chapter 5 – Alyss is brought to the Queen’s castle by the pirate mermaid. She comes to a dark passage, which is the only path to the Queen. And there she stopped by the guardian of the castle, who has mistaken Alyss for the evil mermaid. Once again the madness arises and things are going out of control! Story and Art by Amusteven.
Chapter 6 – Although not necessary, it is recommended that you have read the “Tanya & The Succubus” series prior to this for a better understanding of the whole story. Alyss comes to the Queen’s room to see the Queen. While she is asking the Queen for the cure, the madness shows up again. How is Alyss going to deal with the situation this time, and also for the last time? Story and Art by Amusteven.