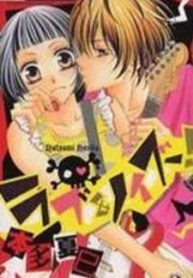 From Shinnen:
Band for Life!’s energetic Kuroko thinks of the popular band ‘Nitro Pop’ as her enemy because there was once a time when she was ignored by their unsociable vocalist and guitarist, Niko. However, their songs and performances are so captivating that it’s hard not to be mesmerised by them. As it turns out there’s a plan for them to perform at the same live event…!!
With a pure funk beat that’s guaranteed to capture your heart, the emotional rock romance makes its grand appearance!
Also includes: Renai Misui, Ero Pure