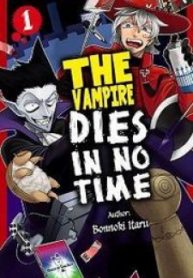 A vampire hunter learns of a mansion inhabited by a vampire who’s rumoured to have kidnapped children and goes there intending to take him down. But then it turns out that the vampire’s a wimp who keeps turning into ash at the smallest things… And that the kids aren’t being held captive, they’re just using the “haunted house” as their own playground.