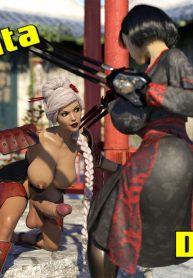 During a seemingly peaceful afternoon of meditation, Kung Futa Master Yumi is rudely interrupted by an assassin named Kim who’s hellbent on ridding the world of the Futanari once and for all. And the second that Yumi gets the upper hand on her would-be assassin, she becomes hellbent on showing Kim that dickgirls ain’t so bad.