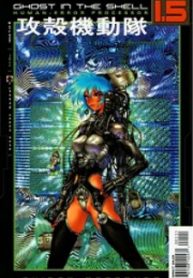 From Dark Horse: Deep into the twenty-first century, the line between man and machine has been inexorably blurred as humans rely on the enhancement of mechanical implants and robots are upgraded with human tissue. In this rapidly converging technoscape, the covert-ops agents of Section 9 are charged to track and crack the most dangerous terrorists, cybercriminals, and ghost hackers. And speaking of ghosts, when supposedly dead people start turning up walking and talking, Section 9 begins to look into the possibility that corpses are being “puppeted” from a remote location, and some serious powerbrokers may be pulling the strings. Ghost in the Shell 1.5: Human-Error Processor presents for the first time in America the “lost” Ghost in the Shell stories, created by Shirow Masamune after completing work on the original Ghost in the Shell manga and prior to his tour-de-force, Ghost in the Shell 2: Man-Machine Interface, but never collected until now. Focusing on Section 9 agents in their daily battle against technocrime, Human-Error Processor has all the mind-twisting cybermadness you’ve come to expect from Ghost in the Shell, but set in a more police-procedural context with action and suspense galore.