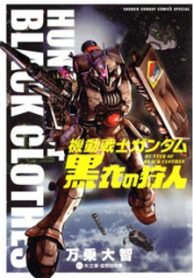 In the year U.C. 0079, as the One Year War draws to a close. Major Wolfgang leads the Principality of Zeon squadron “Hunter of Black Clothes” on atmospheric patrols. The squad is named after Wolfgang’s black Zaku. The Federation fears them as “GM Hunters”. When Wolfgang enters combat with a GM squadron fatefully close to the atmosphere.The hidden war of an ace Zeon Pilot.