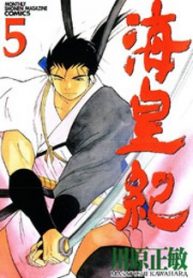 The main character is Fan Ganma Bizen. He is the captain of the legendary black vessel. Fan Ganma Bizen is lazy and clumsy — that is him when is resting. But once Fan decides to work, he is the best man available. Fan says things that normal people can hardly understand. And he doesn’t say much, he only gives lots of clues.
Everything starts when Captain Fan let Mia and Tuban Sanoo be aboard. Mia is a princess of a fallen country and Tuban is the best, people say, swordsman as well as strategist. Although Fan Ganma Bizen is the main character, it seems Fan, Mia and Tuban are the main characters as Mia and Tuban appear in all episodes. Mia is looking for science to restore her county, Ontana. Tuban is protecting Mia as the will of someone Tuban trusted. Fan Ganma Bizen agreed to take Mia to where she could locate the science in exchange of her virginity. (Don’t get Fan wrong here, I believe he meant something else but at this moment, Mia’s virginity is all I can guess.)