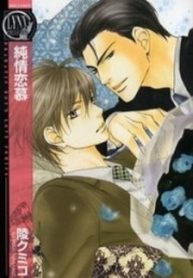 Karou, the male twin to the female super-model, Tsubaki, hates his face for its feminine beauty. Disgusted by the men drawn to him by his similarity to his sister, he has grown to hate any kind of contact with men. Then why is he conflicted by the attentions of Shino, the president company giving financial backing to Tsubaki’s cosmetic firm? Isn’t Shino just like all the other men seeking a substitute for Tsubaki?