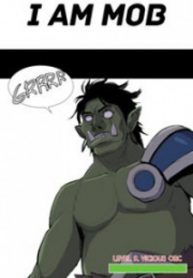 A hopeless low-level orc warrior in an old RPG game finds his life turned around when he marries a beautiful elf and has a son who, unlike him, is incredibly handsome and a high-level warrior. As the orc tries to raise him as the ‘boss mob,’ his son runs away from home only to face a breathtaking journey in the wild world of games. He now must go after his son before his entire world spirals out of control.
Korean Webtoon
http://www.joara.com/webtoon/book_intro.html?book_code=3113