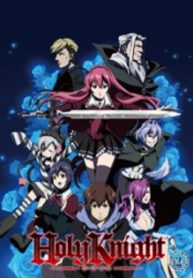 Mizumura Shinta didn’t know what to make of the situation when the sexiest girl in school, Kishimoto Ririsu, starts seducing him and things get extremely physical. Shinta isn’t rich or the popular guy in school so it doesn´t make sense that Ririsu would be so interested in him. But Ririsu is in fact a vampire, a secret that she will kill to keep hidden. As the relationship between Shinta and Ririsu grows, it gets harder for her to keep the secret hidden from him. And when those close to him, like his semi-romantic childhood friend Makimura Chizuru, are involuntarily thrown into the chaos, deep dark secrets get revealed.

Busted in One Thrust

About Getting Asked Out By The Biggest Misogynist In School