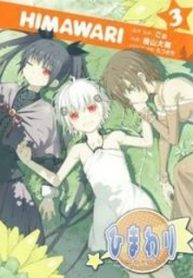 Hinata Youichi and Amamiya Ginga are members of their school’s Space Club. Always aiming for outer space, they have tried many experiments and have failed everytime. One night when the moon is full, a UFO crashes in Memorial Park. But this UFO seems to have a girl inside! From Baka-Updates: The story starts with two members of the Space Club launching their 21st rocket, Himawari. The club president, Amamiya Ginga, is the son of a hero who does everything with a grin and states that “Nothing’s impossible for the members of the Space Club!” after jumping off the school’s roof. The protagonist of this story, Hinata Youichi, is a space-lover and knowledgeable about starts, is a less outgoing than Amamiya, still follows the President around, sometimes forcefully. The story picks up when Hinata sees a shooting star, so he starts going to where it landed. Along the way, he meets up with Amamiya, stating that is wasn’t a meteor, but a UFO. Based on the Visual Novel, Himawari by Blank note