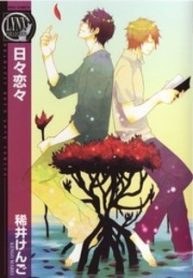 Love Everyday:
Arata and Yamato are going out, but it seems that Yamato doesn’t get like getting close to Arata at all. Arata goes crazy over not being able to figure him out!
Midnight Delivery:
The highlight of every late work night in Sakaki’s life is seeing the parcel service man Nishimura drop by the company: the man who already rejected his love confession once before.
Late Night Struggle:
Miyata is woken up in the middle of the night by a call from his lover.
Hands:
Graduation is approaching and Murakami Tokuzou has never found the courage to confess his love to his art teacher. And then there’s a mysterious love letter in his shoe locker…
The Two of Them, Waiting for Spring:
Always being teased for looking like his little sister, Sougo is sick of it. One day an old childhood friend of his transfers to his school and he remembers that one uncomfortable incident that happened between them…
The Prey I Aim for Won’t Escape:
Saiga attempts to seduce his infirmary teacher who believes there’s nothing better than big chested AV girls.
It’s HOT! (Continuation of The Prey I Aim for Won’t Escape):
Saiga and his sensei deal with a way too hot summer night…