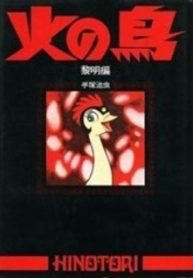 From Viz: Phoenix is made up 12 complex stories linked by the presence of the mythical bird, an immortal guardian of the universal life force. Read in order, the separate stories jump across time, alternating between a distant future and a distant past, converging on the present, with characters from one story being reincarnated in another. The 12 stories–over 3000 pages. Dawn: The first volume, originally serialized in 1967. This story takes place in 240-270 AD, in the era of Queen Himiko of the Yamataikoku. Using her army, led by feudal general Sarutahiko, to invade Japan, she seeks the Phoenix and eternal youth.