Girls Will Be Girls [TheDude3DX] 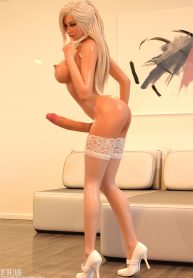 N/A, it has 5 monthly views

Futa bombshell Kayla has been rocking her cock all on her own for a while. Now she finds herself joined by glam goddess Tatiana, who we’ve seen before in the previous installment of Girls Will Be Girls, then still an all-natural woman. With two cocks to clash in sizzling girly getups, this second part release in the Girls Will Be Girls series is explosive!

My StepMom Is A DickGirl?! [3DSimon]