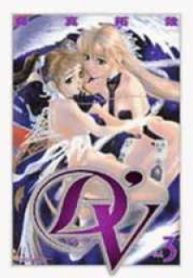 From Tokyopop:
In the year 2068, the Brain Computer, created by humans to be the core of a machine-driven Earth, itself creates Leave, an android that far surpasses the abilities of humans. With mankind now an unnecessary aspect of the Earth ecosystem, Leave, along with her ‘father’ Fenrir (the human scientist who raised her), destroys humanity and in its stead creates the four ‘Mothers’ who in turn create an android race modeled on Leave known as the Selenoid.
They divide the world into four parts, each ruled by a Mother, and then further sub-divide the android population into hierarchical levels with the strong at the top and the weak at the bottom. A virtually perfect society …
And it would have remained perfect if some of the surviving humans hadn’t formed a revolutionary group together with some of the lower caste Selenoid with the explicit purpose of overthrowing Leave and delivering the Earth back into the hands of the humans.