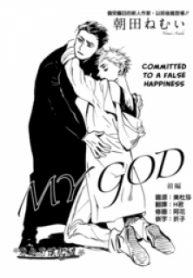 From Must Be Endless: Read this while praying for the fate of two people, a BL that will save your soul. “You will be my other half.” Having infiltrated a religious organization to save Liv, who adores the cult leader, Catholic priest Ross is instead captured and held captive. “If you become my other half, we can both be saved,” Liv believes blindly. Giving Ross a drug which dulls his senses, Liv then rapes him. Believing in the precepts of his faith, Liv pities Ross and convinces him to resign himself to accept this relationship, but… A dramatic story about a young cult follower x a Virgin Mary type Catholic priest. Collected together with the following magnificent stories: A discarded houseplant that becomes human… Do I recognize that face? And a mysterious couple.

My Boy X My Love

Lamento – Beyond The Void