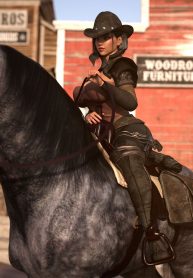 N/A, it has 8 monthly views

On a quiet afternoon in Hardwood, South Dakota, local gunslinger Daisy Jane heads out on horseback to her favorite saloon – it’s been a long day for this little filly, and she could sure use some relaxation in the form of a cold one… or five. But a big bang, a bright flash, and burning fire in the sky trailing off of an unidentified flying object catches and quickly diverts her attention. Curiosity gets the better of her as she rides toward the site of the crash, pistol in hand. Meanwhile, Aliena – dickgirl from the planet Futa and the pilot of that crashed aircraft – has had a rough day and could sure use some relaxation, too. In the form of that hot little Earth girl who is headed her way on horseback. Soon, Daisy finds herself aboard the mothership, eager to be a part of whatever space invasion Aliena has in mind for her, and more than willing to be ridden hard and put away wet.

To Catch A Trainer (Pokemon) [Palcomix]