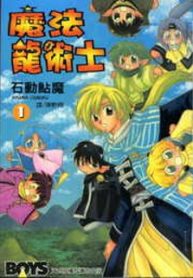 Corseltel, a sacred land where dragons and beastmen reside.
Protected from the outside world by valleys and mountains, it’s inhabitants, including Dragon Mages (ryujitsushi), live in harmony.
The Dragon Mages are able to borrow and utilise the dragon’s magics, but have to care for and look after the dragons as an exchange.
Several years ago, the late wind Dragon Mage picked up a child floating down stream in a crate. Now, the child has grown into Corseltel’s greatest dragon mage, able to utilise all 7 dragon’s magics: fire, earth, wood, water, wind, light, and dark. More like a dragon baby sitter, caring after 7 baby dragons, these are the adventures they face.