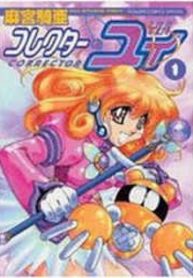 Note: This is the Asamiya version of the manga.
A schoolgirl gains self-confidence, new friends, and a cache of chic outfits when she becomes the computer-programming magical girl, Corrector Yui. She must stop the rogue A.I. Gurossa (Artificial Intelligence computer program) and his hench-programs from taking control of the global computer network. In this future, all human activity is supported by computers, so it’s possible to control the world using the network.
Important note: There are two versions of the Corrector Yui manga series. This is the original one that was written and drawn by Kia Asamiya and published by Shogakkukan in Japan and does not have a release date in the States yet. The Corrector Yui manga that Tokyopop is publishing is done by shojo artist Keiko Okamoto and is a manga adaptation of the anime series.
Source: Manga-Updates