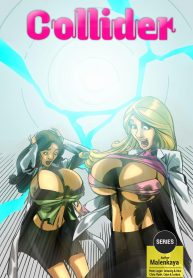 Chapter 1 – The Large Hadron Collider is about to be turned on. The world has no idea what is coming.

Chapter 2 – Two scientists find themselves at the bust enhancing end of a science experiment gone wrong. Manipulated by Dr. Smith, the device has been programmed to make women grow giant breasts and become increasingly horny. But even the perverse doctor couldn’t have anticipated the true extent of the machine’s power– something the two girls hope to exploit. With each step closer to the machine, the girls are more heavily influenced by it, and the once timid scientists find begin to explore their bodies in ways they never thought possible. Can they stop the machine before they are pulled too deep into their own sexual frenzy?

Chapter 3 – After the explosive last chapter, the three scientists struggle to gain control of the growth-inducing particle– leading to an all-out brawl of sexual prowess. Dr. Linkova and Dr. Smith struggle for superiority, but it might be their shy assistant who they really need to watch out for, as she sneaks by initially under the radar. It doesn’t take long for her swell breasts to make that tactic difficult to maneuver through!

Chapter 4 – May might have outgrown her two scientist friends, but this new world she finds herself in is far from glamorous. She wakes up, scrawny and alone, with no memory of the collider, May slowly expels warping energy, with increasingly volatile growth spurts following her as she goes about her day. Can May harness her powers, or will she be swallowed up in the sea of growing bodies around her?

Chapter 5 – May, fully aware of her reality warping powers, has taken full advantages of all the perks that come with being a huge breast goddess. Now the ruler of the world what would one last romp with her old scientist pal Linkova matter before she transcends Earth for better things? If only May knew just how powerful her orgasms are….