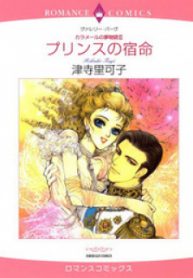 In the Carramer no Yumemonogatari series (カラメールの夢物語シリーズ), also called “The Carramer Legacy” series:
1) Princess e no Tabi (プリンセスへの旅; Journey to the Princess) / Crowns and a Cradle
When Prince Josquin de Marigny swept struggling single mom Sarah McInnes into a limo, he revealed a secret. Sarah’s father had been in line for the Valmont throne — and now her son was the heir! The brooding, blue-eyed prince promised Sarah everything she’d ever dreamed of if she would remain in Carramer — except his heart….
Baffled and bewildered by the sense of homecoming, Sarah was torn. Josquin had given her a new family, but he’d also investigated her past, lied to bring her to Carramer and he’d be regent for her son. So once he took her in his arms, could she trust the promises he made?
2) Koi wo Wasureta Prince (恋を忘れたプリンス; The Prince Who Forgot His Love) / The Baron & the Bodyguard
Watching over him…
Playing royal bodyguard to Mathiaz de Marigny, the seductive Baron Montravel, was a temptation few women could resist. But the moment he was out of harm’s way, Jacinta Newnham had fled his château — and abandoned memories of moonlit nights that left them both weak with unfulfilled passion.
Now stricken with amnesia and in danger once again, Mathiaz summoned Jacinta back to his side. Jacinta vowed to protect his life, but the greater peril was to her heart — and the haunting secret she could never reveal. When the truth surrounding Mathiaz’s accident — and Jacinta’s connection to it — surfaced, would he force her to leave, or refuse to let her go again…?
3) Prince no Shukumei (プリンスの宿命; Fate of the Prince) / The Marquis and the Mother-To-Be
Back in her lush, beloved Carramer, Carissa Day purchased the perfect B and B for raising her babies-to-be. Trouble was, an aristocratic “intruder” proved she’d been swindled — her new home was actually his royal lodge. Worse, he proved to be Carissa’s teenage crush, Eduard de Marigny, Marquis of Merrisand — now more irresistible than ever.
Penniless and pregnant — with triplets! — Carissa had to flee. Eduard, however, had other ideas. Namely, a partnership giving Carissa a title and protection — and giving him an instant heir. Still, even with reignited passion burning between them, even with a kingdom at her feet, could Carissa wed her first and only love — and forever forsake having his heart?
Descriptions taken from FictionDB.
Note: These are #4 – #6 of Valerie Parv’s The Carramer Legacy series.