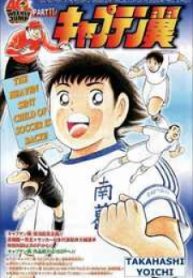 A special oneshot story of Captain Tsubasa as part of the celebration of the 40th anniversary of the magazine Weekly Shonen Jump. This story occurs between the end of the juveniles soccer championship and the middle school soccer tournament of the original Captain Tsubasa series. Tsubasa is depressed after Roberto left him behind and his friends Genzo and Taro are going overseas. In order to cheer him up, his friends organize a friendly match with all his rivals from the juveniles soccer championship.