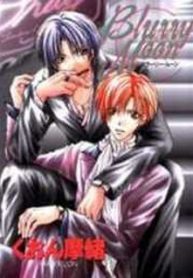 Around the time that Hinaki Mitsura climbed his way to number two host in the club, Tsukayama Satoshi transfers from a branch store. He was Mitsura’s senior in high school, and also the cause of Mitsura’s most devastating memory. Tsukayama proceeds to take over as top host, surpassing Mitsura and the man he has been living with, Miura-san. Miura-san is kind, gentle, and wants to protect and love Mitsura. But Mitsura’s heart is closed, that is until Tsukayama starts to work his way under Mitsura’s skin. His growing attraction to the arrogant one who caused a deep scar under the full moon is a source of confusion and suffering, and he begins to question everything he is – everything he has worked to become. This love story vividly depicts the human drama among hosts, under the blurry moon.