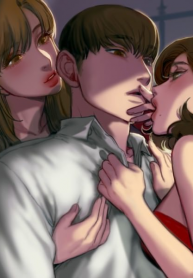 After he was laid off, Seho wasn’t sure what his next move was going to be. He only took a job at a cafe so that he’d have something to do with his time. He never imagined that he’d catch the eye of the cafe owner, or that being with an older woman could be so electrifying. Then again, Mira assets are definitely one of kind. Things are looking up until Mira asks Seho to move in with her and her daughter. Nayoung may seem innocent, but things aren’t always what they seem. And Seho’s about learn just how complicated family relationships can be.