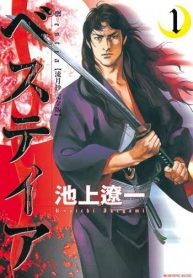 Long, long ago, a woman who had coupled with a strange beast gave birth to a Saishi, a half-human half-beast creature, whose body was filled with venom. These brutal creatures were used in battle during times of unrest, but during times of peace, they were shunned and hated. Indeed, they were cursed. A Ronin samurai called Gen Tsukinosuke is one of the few surviving Saishis and the owner of a magnificent sword, the “Fangs of God.” He travels in search of his estranged sister and sleeps with women who yearn for death, killing them with his deadly poison. The story takes place in the war-torn days at the end of the Edo period. With a destiny to be a Kaishi, Tsukinosuke is also being swallowed up by the harsh flow of history.