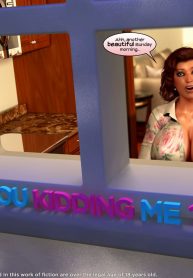 Part of the Busted Saga / Kalevra series for Y3DF. To see the timeline click HERE.