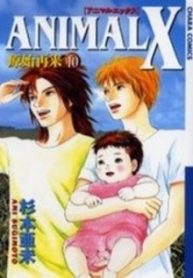 N/A, it has 7 monthly views

Far away from home, Yuuji and Minato have carved a place for themselves in Alberta, Canada, with their new baby daughter, Yui. Yuuji works at a University, while Minato – though still as childish as ever despite being a new dad, works at the conservation center as a mediator for the better understanding between humans and Dinosauroids.
It’s been a year since the contagion called X Syndrome had been unleashed on the human race. Just as distinguished government officials and police force began to regain control of the situation, the existence of the Dinosauroids became known by the academic community. Dinosauroids – while they have a tendency to possess superhuman abilities, female births are extremely rare and problematic. Which is why the existence of Yuuji (a converted female Dinosauroid), and the newly born Yui are so valuable and sought after by many – most of whom wont hesitate to resort to dubious means to acquire either one of them!
True to words, Yuuji has indeed become the beauty as many had predicted – provided he takes off his heavy glasses of course! He is never short of admirers – both males and females, including a University student Linea, and the various Dinosauroid males eager to mate with a Dinosauroid female. And this is where the role of a female in a heavily populated male Dinosauroid society comes to play. Add to that, the various nefarious people after the newly born Yui, both the parents Yuuji and Minato might have their hands full this time around as well.
This is the third and final installment of the Animal X series.