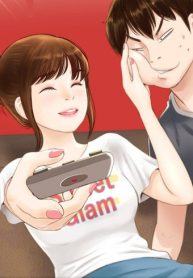 Ned starts taking advice from an older girl on how to make things work with his girlfriend,
but he starts getting distracted. Love Is On The Air