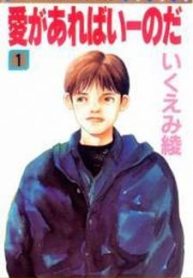 Mizutani Yoshiki is a 21 year old working as an assistant director for TV shows. His friends from back in high school are all jealous because they think that he’s able to rub elbows with celebrities but in reality, he’s so far down the TV industry hierarchy that he’s more the resident lap dog relegated to doing everyone else’s dirty work.
One day, he gets assigned to help out with filming for the latest “it” drama. The lead female actress turns out to be none other than Fujiidera Mitsuko, the girl he had a crush on back in high school who’s now become one of the hottest rising stars in the acting world.
As he quickly finds out though, she’s nothing like the shy, quiet girl he knew from back in high school. What happened to her for her to have changed so much?
Includes another story
??My dear B?F?
Ever since the car accident that ended her dreams of becoming a short track athlete, Yumi’s been struggling to pick up the pieces and move on. One day, a mysterious boy who calls himself “Jiro” crashes into her in the school hallway. They quickly build up a close friendship—but there’s something strange about him that she just can’t put her finger on. Who is he really?

Is It Illegal To Be Blackmailed By Your Student?

Imawa No Michi No Alice